Should We Resolve Conflicts With Logic Or Emotions?

Each approach has its strengths, and we should choose our approach based on the conflict we're facing. Let me explain how we choose, and why. 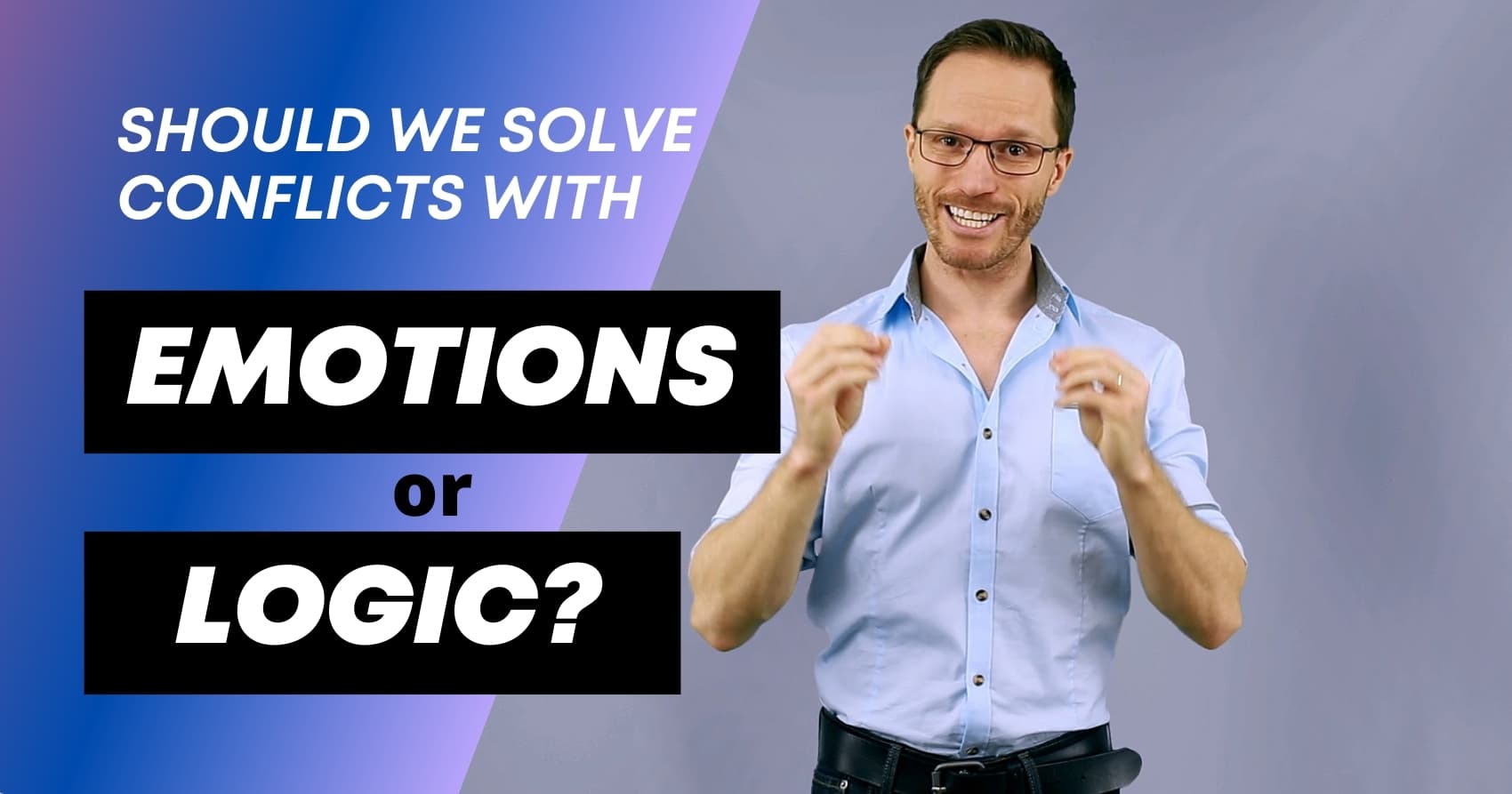 This video is from my course "Conflict Management: A step-by-step recipe to reduce and solve conflicts" which is on super-sale until Monday! Click here for more info and the discounted price.

Click here to learn more about the course - and to get a significant discount!

Although most of us like to think that we are logical, thinking creatures who make up our minds based on our intelligence. The truth is that we shift back and forth between emotional and logical state all the time.

So in this video, I’m gonna explain the differences between those two states. And how our thinking and our actions tend to change from one state to the other. And then I’ll talk about what we can do to try to influence others to go into the state we want the conversation to happen in.

The pros and cons of emotional conflict resolution.

Conversations in emotional states are great when we want to connect with someone on an intimate level. Or on something they have over-all positive thinking about.

It’s also helpful to be in an emotional state when we want someone to make decisions based on what they want deep down. As opposed to superficial or logical thinking. Which is often influenced by our fears. Other people’s opinions. What we think we should do. And so on.

But decisions made in an emotional state are, obviously, also more likely to be emotional. And when the emotions are in the categories of nervousness, frustration, anger, or defensiveness, this state is not very likely to be helpful. In fact, it’s much more likely to make people act immature. Make them lash out, or simply refuse to participate in constructive conversations.

If the conflict is happening in a loving relationship where both parts truly wish to resolve the conflict in a positive and constructive way, and the emotions you’re both feeling about the conflict is that of sadness or hope, it’s perfectly fine to do conflict resolution in an emotional state.

The pros and cons of logical conflict resolution.

When we’re in a logical state, our decision making will be more influenced by logic, external factors, and long-term goals.

Because of this, people tend to sometimes make decisions that go against what they truly want. Because they’re adapting to the pressures of others, and less in touch with their desires.

But on the plus side, we also tend to think about long-term consequences when we make decisions in logical mode. And we tend to act more calmly. And be more receptive to intellectual arguments.

Doing conflict resolution in a logical state is recommended when the conflict happens in relationships that are more superficial or professional than intimate. Or in any conflict where the emotions connected to the conflict are in the categories of frustration, defensiveness, or fear.

How to elicit emotional or logical states.

If you want to encourage someone to go into an emotional state, you want to speak and act with them in a more intimate and emotional way.

That includes things such as speaking with a softer voice. Slowing down. Holding soft eye contact. Smiling. Appropriate physical contact. And speaking about things that are more emotional in nature. Having the conversation in a more intimate setting, like sitting together on the couch with dimmed lighting, can also help.

On the other hand. If you want to encourage someone to go into a logical state, you want to speak more assertively. With a clear voice and a determined pace. You should usually focus the conversation on logical topics rather than emotional ones. And it will help if the setting feels a little more professional than personal.

To encourage people further, you might also want to ask them questions that encourage them to use logical arguments. And do this before you start the conflict resolution process. An example would be to ask a colleague to explain a task that they’re good at. Or to ask a friend to explain a concept to you that they know well.

So to sum up: When a conflict happens in a loving relationship where both parts are motivated to solve it and experiencing more soft than aggressive emotions, the emotional state is likely to help us. But when a conflict happens in a more superficial or professional relationship, or one or more people involved are feeling anger, fear, or defensiveness, a logical state is more likely to be productive.

Click here to learn more about the full course - and to get a significant discount!‍