How To Talk To Someone Who Gets Defensive

If we want to be skilled at giving feedback or dealing with disagreements or conflicts, we have to be good at reducing defensiveness. Let's explore how. 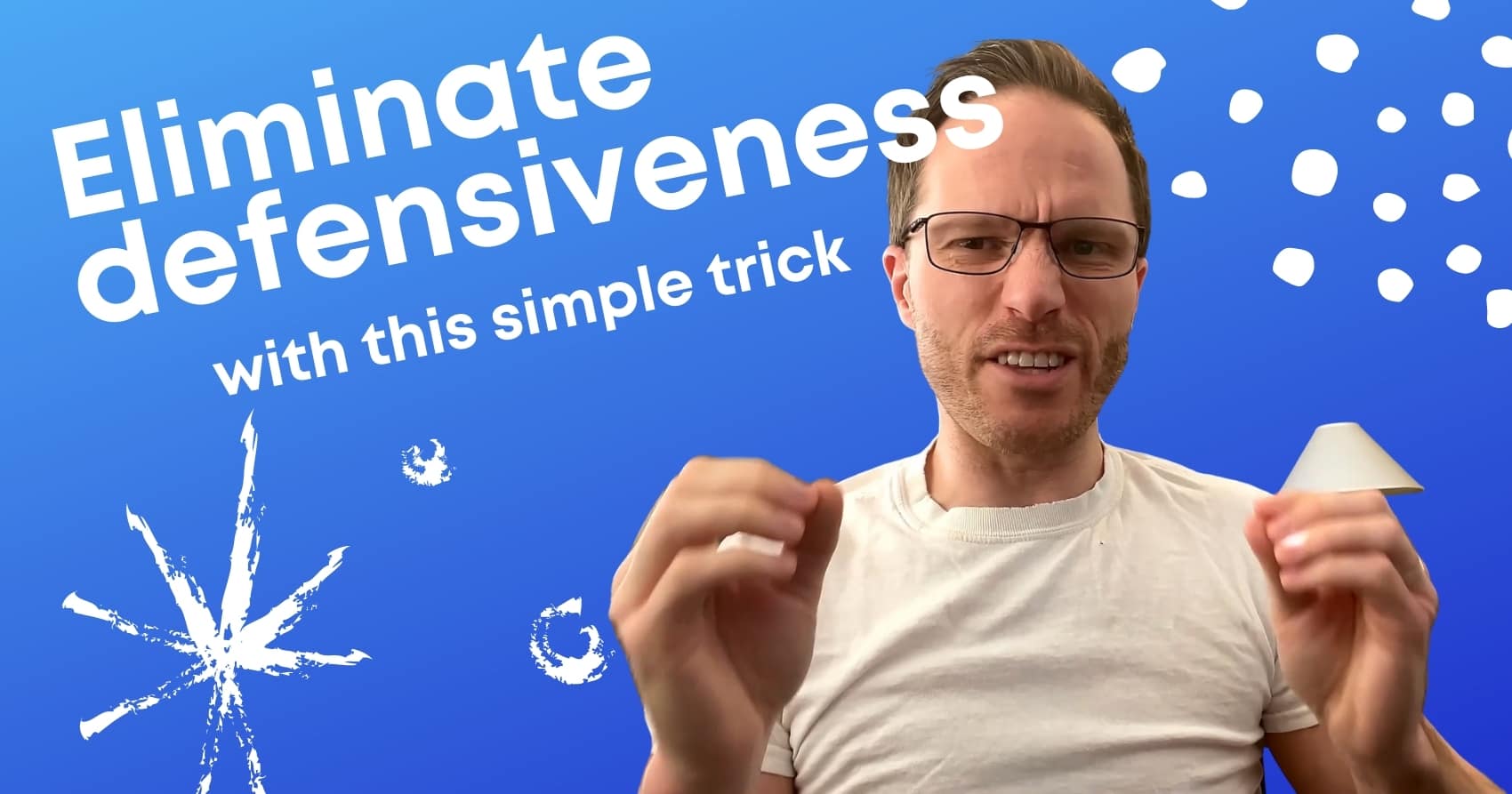 When someone becomes defensive they tend to block any chance of finding mutual ground or a win-win solution.

In my course about conflict management I talk about how we can try to avoid defensiveness from happening in the first place. But even if we do everything correctly, we can't guarantee that the other person won't react defensively.

So I shot this video to explain why that happens, and what we can do to fix it if it does.

How to reduce defensiveness - video transcript.

Let’s talk about how we can remove – or at least reduce – someone’s defensiveness when we talk about sensitive topics.

In every disagreement or conflict, we run the risk of one or both sides becoming defensive or offended. Even when what’s being said wasn’t meant to attack or criticize. And when that happens, it tends to be very hard to have an open and solution-focused conversation. Unless we know how to fix it.

In my conflict management course, I share a bunch of techniques that help us reduce the likelihood that this will happen in the first place. But, sometimes we might make a mistake. And sometimes we can do everything right and still get these reactions from other people.

Luckily, there’s a way to deal with that. A way that will help us not just diffuse or reduce that defensiveness – but that will also move the conversation in a much more productive direction.

Before I share that technique, though, we have to take a minute to talk about why people tend to get defensive. So that the technique fully makes sense.

Why do people get defensive?

The main reason people get defensive or offended is that they feel attacked. They feel like what’s being said either directly or indirectly criticizes them. And that the person saying it view them in a negative light. And very often it will feel like the other person dislikes their very personality. Their entire being. Even when the problem is something small.

Since we humans generally don’t like to be criticized or disliked, the common reaction is to fight it. To try to either avoid it by refusing to continue the conversation, or to convince the other person that they’re wrong. Usually by aggressively, or at least adamantly - disagreeing with it.

In other words, we get defensive.

And when we do, we stop listening. We block ourselves from being objective. And it becomes very unlikely that we’ll admit that there might be ANYthing to what the other person is saying.

And whether we’re actually in the wrong or not – these things are going to make it very hard to find mutual ground and compromises.

So when people get defensive, we have to do something that will show them two things. 1. That although we might have this one disagreement with them  – we still love, like – or at the very least respect – them as a person. And 2. That we’re not trying to make them the bad guy.

How do we prevent people from becoming defensive?

The easiest way to do that is to directly express to them that we’re not doing what they think we’re doing. Which is attacking, criticizing, or trying to devalue them as a person.

However, we have to be careful not to talk about what we think THEY are thinking or feeling. Because if we do that when they are being defensive, we’ll usually just make things worse.

They DO like it, however, when they learn that our assumption makes them look good.

In other words. If you tell your friend that you know they did what they did to be mean to you – they’ll get defensive, offended, hurt, or similar.

But if you tell them that you are sure they did what they did because they were trying to help. Or something equally positive. They’ll get LESS defensive and offended. Even when what they did lead to a bad outcome.

Let’s look at an example of how we can use this to diffuse defensiveness.

An example of how to reduce defensiveness.

Let’s say that Amy is upset with her friend Mike because he said something to her boyfriend that upset him.

If Amy says anything that makes Mike feel like she believes he did it on purpose to hurt her. Upset her boyfriend. Or anything along those lines. Mike might very well get defensive.

He doesn’t want Amy to see him as a bad person. And he might get sad, offended, or angry if he believes that that’s how Amy sees him.

When Amy notices that Mike gets defensive, she can diffuse it by stating that she has a positive assumption about Mike’s actions. Even if she doesn’t fully know what that was.

By saying that she believes that Mike wasn’t trying to create a problem, but that things just went wrong, she can ease his feeling of being attacked, judged, or disliked.

She can also throw in a compliment about Mike. Something that fits their history. That shows him that although she might be upset about this specific thing, she still likes her friend just as much as she always has.

Once she’s done this, she can move to learn more about what Mike’s experience of the situation was. Or to the problem-solving stage.

So, she might say. “Look. I’m sure that your intentions were good, and that things just didn’t play out the way you meant. So, can you tell me what you feel went wrong?”

Or, “I’m sure you didn’t mean to upset my boyfriend and that there was a misunderstanding, but now that it’s happened, how can we fix the situation?”

Of course, the words we say, and whether we move on to ask about their experience or to discuss a solution, depends on the specific situation - but the general concept is the same:

When you notice that someone seems defensive, think about what they might feel attacked by. Or what they might think that you’re thinking negatively about them. And counter-act it by stating something positive about them and their intentions. Then move on to ask them either to share their experience of the situation with you – or if they have any ideas for how to fix things.