Let me share with you 5 very simple steps (and 2 bonus tricks) that will help you give genuine and great compliments to anyone in any setting. 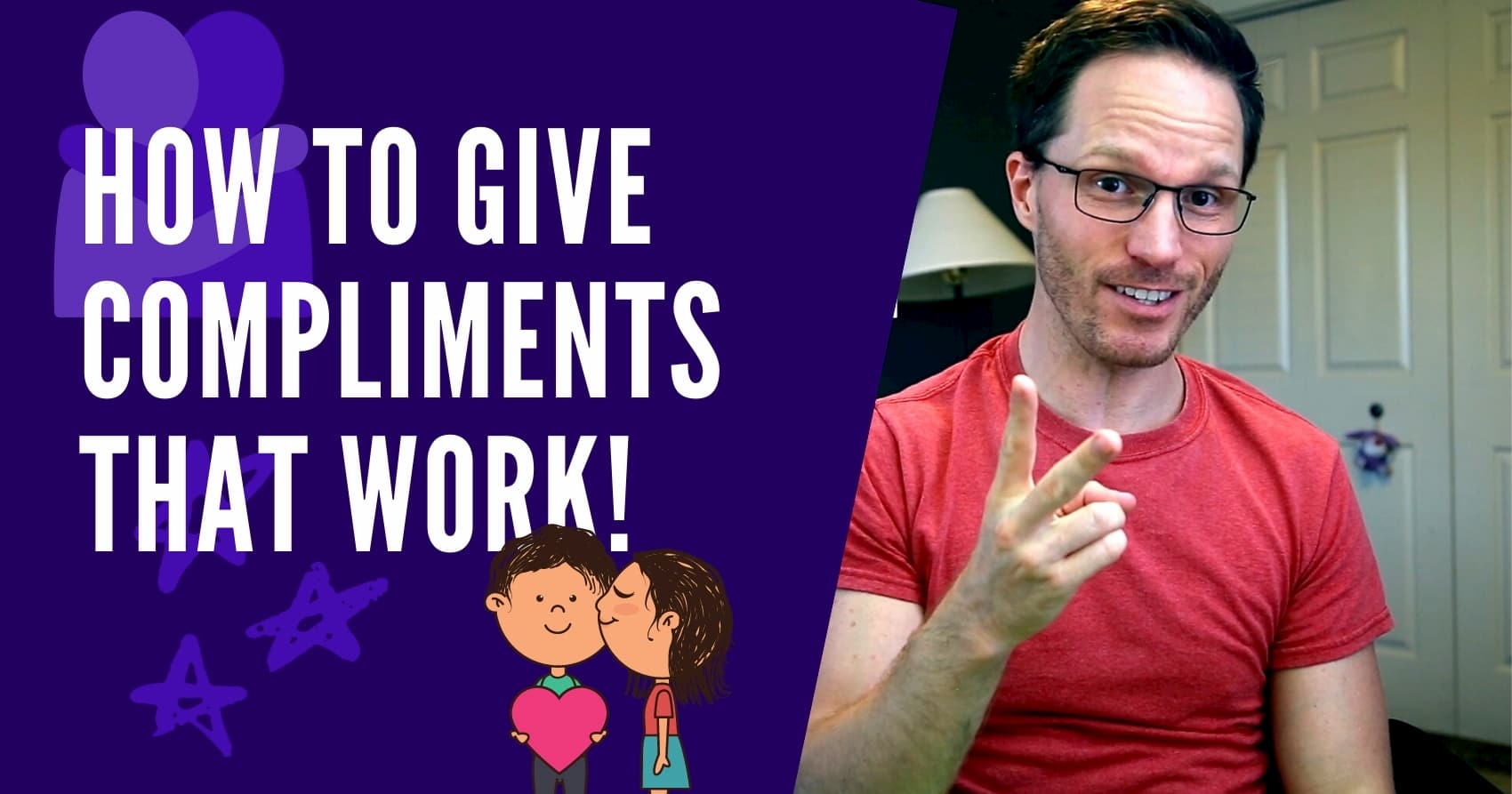 In this video on how to give genuine and great compliments, I'm going to talk about:

That’s a lot of content in one video, so stay sharp and feel free to save this video so you can come back to it later.

And, of course, go ahead and subscribe to my YouTube channel so you can find this and other videos easily in the future ;)

(PS: If you prefer text to video, you can read the video transcript below.)

How to give observational compliments.

Observational compliments are exactly what they sound like. Compliments based on your observations of the other person.

This is, of course, the most normal way for people to compliment each other.

“Hey, I like your jacket!”
“Well done on that project.”
“You’re really good at that!”

And here’s the important thing about giving observational compliments: They should be about something that’s the other person’s “fault”.

Something that’s a result of their choices, their personality, their character.

Not something they were born with or that’s outside of their control.

What is an emotional compliment?

An emotion-based compliment is about how you feel around someone – or which feelings you have for them.

That’s right. Telling someone, “I love you” is a compliment.

Not only are these incredibly nice compliments. But they tend to be experienced as genuine, open, and vulnerable too. Which only serves to make them even more impactful.

Generally speaking, women tend to be much better than men at giving these kinds of compliments.

So guys, if you want to stand out and be able to give compliments that neither come across as try-hard, fake, or distanced – practice this!

How to give genuine compliments.

No matter which type of compliment you’re giving, specificity will take it to the next level.

So instead of just saying, “I like your style”. Tell them what it is about their style that you like.

And instead of telling someone “I feel safe with you” – tell them why or how they make you feel safe.

This will make the compliment feel even more real, and as a bonus, it will encourage the other person to do more of those things that you like.

Should you elaborate on a compliment?

And if you want to take it even one step further than that – you can elaborate on the compliment.

So if you tell someone that you love their hair color, you might go on to say, “it really makes you stand out from the crowd, and it brings out your smile too!”

Elaborating includes both specificity and paints a picture for the other person that lets them know how the world – or at least you – see and experience them.

But, in most cases, you want to keep this short. Don’t go off on a long rant about it where you’re gushing and gushing over them.

Compliments that people will accept.

Sometimes you might worry that it might seem like you’re fishing for approval or a return compliment. Or maybe you’re giving a compliment to someone who usually dismisses it and you don’t want to give them a chance to.

If so, there’s an easy solution.

Keep talking after you give your compliment.

The easiest way to do that is to bake it into a bigger message. Or to follow it up with a question.

The point is to give the other person something else that they can reply to other than your compliment. It will reduce any pressure they might feel to compliment you back, and it will often distract insecure people from dismissing it. That can, in turn, help them accept your compliment and even build their confidence a little.

Or maybe, “I love that jacket, you have such a great sense of style. Where do you do your shopping?”

See how that works?

Ok, let’s talk about something that kind of flies in the face of a lot of the things I just said. I call these automatic compliments.

And they’re often not just generic and non-specific, they also include no elaborating. And can even be based on things that totally aren’t the other person’s doing.

So why would we give such poor compliments knowing what we now know?

Because they’re not REALLY meant to be a compliment. They’re meant to be a nicer greeting or good-bye or other standard formality than your standard “hello” and “see you later”.

This could include things like saying “hi good-looking,” when you greet a friend. Or “keep being amazing!” as parting words after spending time with someone.

This one’s especially important that you spread out evenly if you’re going to use it. That means: do it with basically everyone.

If you only say “hi good-looking” to the most attractive people in a group and never say anything like that to the other people – you’ll run the risk of being experienced as superficial. Or as you’re sucking up. Or even as desperate and socially uncalibrated.

If you use automatic compliments, whether superficial or not – with most people around you, however, you can help make compliments and positive encouragements more normal in your social circles. Which can greatly influence them.

Alright, that about covers it. You are now a theoretical expert on genuine, intentional compliments. Now go out and become a practical expert on it by practicing!

And here’s a challenge for you: let me know in the comments if you can come up with an example of a compliment that would be both opinion and emotionally based, WITH specificity and elaboration, and that can be said in one or two sentences.